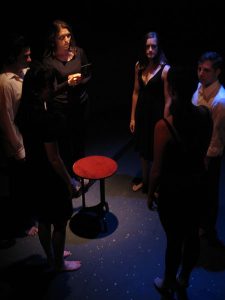 Prior to 2020 I had been moving away from writing and directing live theatre, and COVID has accelerated this movement. I’ll eventually get back to writing for the stage, though it may take a while.

If you’d like to do a production or reading of anything I post on this site, you’re generally welcome to, as long as you attach my name, copyright info, and a mention that I’m an active member of the Dramatists Guild.

1991: ARGUS
An odd one-act about a man with a dog inside of him. Winner of the Out North New Play Competition, received a reading at the Central School of Speech and Drama, London Jan 1993.

1994: CAFÉ ANGST
Another odd one-act, this time about a group of young urban Seattleites trapped for an afternoon within a mysterious café. Produced at Moe’s Mo Rockin’ Café, January 1995, winner of a reading at Miami’s Acme Theater Company, and given a staged reading at Southwark Playhouse, London, later that year.

1996: SCOTCH AND DONUTS
A full length comedy about friendship, with three guys awaiting a trip to sunny Mexico in a dank Sea-Tac hotel room. Produced at the Brown Bag Theater, Seattle, Jan-Feb 1997, given workshop production at Southwark Playhouse, London, September 1997.

1998: THE SCRUB ROOM
A short play about surgeons and why they choose to cut up people. Produced as part of PEEP at the Sit and Spin, Seattle, Oct-Nov 1998.

2000: PETTING SOUNDS, HAPPY VOLES
Two short plays written for the 14/48 Play Festival. Petting Sounds concerned strange noises coming from an apartment, while Happy Voles was a cheerful look at the near-future of genetic behavioral modification. ConWorks, Jan 2000. Petting Sounds went on to a radio production as part of Taboo: An Evening of Live Radio for New Waves Productions, August 2000, and was staged by Olympia’s Artesian Theater in February 2001.

2000: THE ETERNAL VAUDEVILLE
A full length play with music about a theater filled with the ghosts of past entertainers, and a modern-day street performer who’s offered a lengthy run. A commission from the Seattle Theater Group. Moore Theater, Feb 2000.

2001: THE MAN WHO WAS THURSDAY
adapted from the novel by G.K. Chesterton. A poet-policeman infiltrates a cabal of anarchists bent on destroying society, only to discover that it’s possible the entire group are undercover policemen. Produced at Seattle’s Taproot Theatre in spring of 2002 and at Wyoming Seminary, PA, in winter 2004; published by Rain City Projects.

2001: DISAPPEARING ACT/AKA
Two ten-minute plays written for the July 2001 edition of One World Theatre’s 14/48. Disappearing Act: a woman discovers salvation in the anonymity of her gym. AKA: a blind date between a woman who believes in past lives and a man with multiple personality disorder.

LITTLE WHITE PILL
A 40-something year old man decides to stop aging, but life has other plans. Given a fully staged reading to the FringeACT new works festival in March 2002, ACT Theatre, then produced at Union Garage on Capitol Hill that summer.

2002: THE CENTER CANNOT HOLD/AULD ACQUAINTANCE
Another 14/48, another pair of short plays. Center is about a working menage e trois, while Auld Acquaintance was a play for the New Year, about dinosaurs, the Pope, and all we had to look forward to.

PERSPECTIVES
A short play about the different uses, and abuses, of TV, Film, and Theatre. And selling Tequila.

2003: IMPORTANT DATES IN HISTORY
A new short play for a new 14/48 about a man who invents a time machine to get a new girlfriend.

HOW TO BE COOL
A one-act play in which a self-described “Student of Cool” does his best to define it to a high school class in 1962. Produced at the 2003 Seattle Fringe Festival, encored in 2004 at the Union Garage, Peninsula College and the Bumbershoot Arts Festival in Seattle, then revived for another run in Summer 2009 at Open Circle Theatre.

2006: MARVOLO THE ANTI-SMOKING MAGICIAN
A down-at-his-heels magician pulls it together for one last magical mystical spectacle. A play with magic, produced at Odd Duck Studios, Seattle, April 2006.

BIBLE STORIES FOR AGNOSTICS
The story of the original First Family, following their fortunes from the Garden of Eden to the first city of Enoch. “A is for Apple” was performed at 14/48, NPA’s Tacoma Reading Series, and won a slot in Atlantis Playmaker’s national “Short Attention Span” play festival. One of the plays, “E IS FOR EQUINOX,” was part of the St. Gensisus Society’s “In Preparation” 10 Page Play Festival. And several of the plays were read at Absurd Reality Theatre’s “Longenpalooza I and II” in 2006 and 2007. ART also workshopped the entire cycle in 2007, and it was awarded a reading in 2020 at Portland Civic Theatre Guild.

2010: MY TIME WITH THE LADY
Co-written with Ron Richardson, this autobiographical play tells the story of a young man who at 18 got his dream job: working the front desk at a strip club. An homage to Seattle’s Lusty Lady peepshow, produced at the Little Red Studio in August, then a year later in the Market Theatre.

1999-2010: ARCANA
Twelve new short plays of a projected 22 play cycle based on images from the Major Arcana of the Tarot deck. “STARDUST” won the Irene Bashmore First Place Award in LA’s New Stages One-Act Play Festival and was published in Poems and Plays, “THE PICNIC” was produced at Little Red Studio’s Erotic Shorts, “AFFAIRS WITH THE MOON” was published in Cirque, “WILD RIVER” won Open Circle’s “Eat My Shorts!” Audience and Jury Prize, and all eight were produced at Open Circle Theatre in September of 2010, with various revivals since, the most recent being in October 2021 at Run of the Mill Productions in Iowa City. Available for purchase via Dramatic Publishing.

2010: SHERLOCK HOLMES AND THE CASE OF THE CHRISTMAS CAROL
A full-length Yuletide play. The Great Detective has a very unusual Christmas, in this literary mash-up of Conan Doyle and Dickens. Enjoyed box-office smashing productions at Seattle’s Taproot Theatre and Portland’s Artist’s Repertory Theatre, dozens of productions since, and is available for purchase via Dramatists.

A new musical adapted from the best-selling comic memoir by Betty MacDonald, with music by Bruce Monroe. During the darkest days of the Great Depression Betty, a single mother, returns to her family in Seattle and survives the worst that the world can throw at her thanks to her large and eccentric family, in particular her incredibly bossy sister Mary. Given staged readings at Taproot Theatre and as part of the 5th Avenue Theatre’s New Works Festival, 2019.

I have several other scripts in development, including a four-woman thriller (The Sound in the Next Room) and a new solo piece about Professor Moriarty, Tea with the Professor. If you’ve got an interest in these or any of my other work, contact me.